Here’s a picture of one of the spouts of the Cooper Centennial Fountain in the Turner Quad on SMU campus. Do you notice anything of interest about the way the water falls? 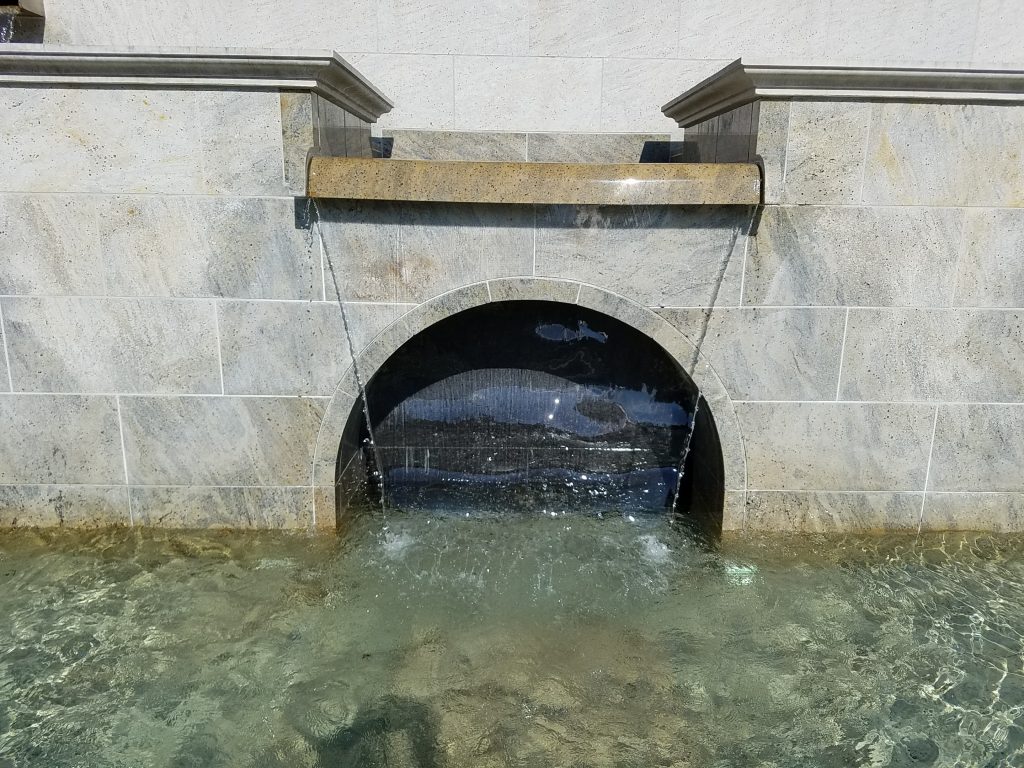 One thing that many people notice is that the water flows in toward the center on either side of the stream. Why would that be? The water is flowing straight ahead in the channel above the spout; why wouldn’t it continue to fall straight ahead, producing vertical sides to the sheet of falling water?

Actually, just a few simple mathematical principles will show why the stream is compelled to become more narrow as it falls. Consider the amount of water that flows, say in one second, across any horizontal line in the image, say the bottom lip of the marble spout or one of the mortar lines in the wall behind the stream. That amount of water is proportional to the width of the stream times the speed at which the water is falling. On the other hand, the only source for water flowing across a line closer to the ground is the water crossing a line higher up; no new water is coming into existence within the stream. So the amount of water per second crossing any two horizontal lines must be the same (assuming water is being released over the lip at a steady rate, which it presumably is).

Now here’s the key point: water, like anything else falling under the influence of Earth’s gravity, speeds up as it falls. So if the stream did stay a constant width as it fell, the amount of water crossing lower horizontal lines in a unit of time would be greater than the amount of water crossing higher horizontal lines. Since that’s impossible, the stream must become narrower as it falls. Mathematics forces it to.

Now, you might ask, “Doesn’t this have something to do with surface tension or cohesion forces in the water?” And that’s a very reasonable question. There is in fact another logical alternative to the stream becoming narrower: the sides of the stream could remain vertical, but it could break up internally into numerous smaller substreams, perhaps eventually forming a mist. It’s surface tension and/or cohesion of the water that keeps it together in a single stream, and given that it remains a single stream, the simple math above tells us that stream must become narrower. (Even if the stream did break up, the “total width” in some sense of all of the substreams would of necessity decrease as the water fell, for exactly the same reason.)

In fact, because matter is neither created or destroyed in the fountain, the math tells us more: the amount of narrowing must precisely offset the speedup of the water. Hence, a great activity that participants with a high school math background could do is actually model the contour of the sides of the stream. If you measure the speed of the water going over the lip, you can (using the effects of constant acceleration due to gravity), derive the speed of the water at any position below the lip, which in turn allows you derive the width of the stream at any height. Assuming (because of symmetry) that the stream remains centered below the lip of the spout, you can then derive an equation for the side contour of the fountain. Participants could graph their equations, and then superimpose their graphs over images of the fountain (or even the actual fountain, if the graphs are made in a waterproof medium). You should be able to achieve excellent agreement between the model and the actual contour of the water in this system. If you create any such images, please add a comment to this post telling us about it.