Perhaps your stroll around Dallas Fair Park brings you to the Esplanade, a stately reflecting pool between Centennial Hall and the Automotive Building. 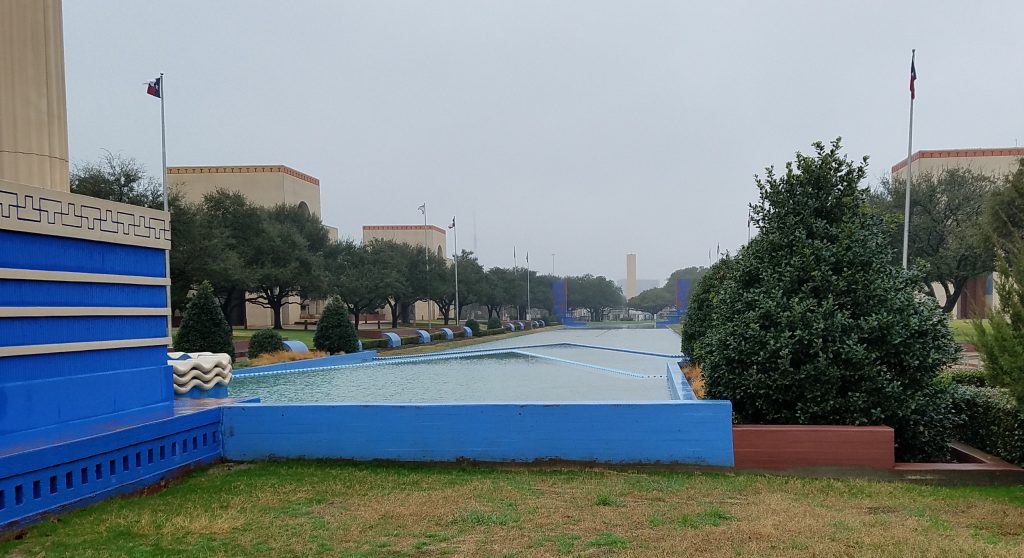 Rather than choosing to build the walls straight across the Esplanade, the designers chose to angle the walls, creating two long, sharp triangles pointing away from one end of the Esplanade and leading the eye toward the fountain in the lowest section of the pool. Looking at these triangles, it looks very likely that the two sides of each triangle are the same length, making them a special kind of triangle called an isosceles triangle.

Looking at the resulting vista, one question that comes to mind is whether the engineers made the two triangles the same shape or not. The first thing to notice is that they can’t literally be identical shapes, because as you can see in the picture above, the nearer triangle is inset horizontally (along the shorter dimension of the pool) from the farther triangle. In other words, the base of the nearer triangle is shorter than the base of the farther triangle.

But when we talk about things being the “same shape,” we don’t usually mean that they are identical. For example, in the usual sense, all squares are the same shape, but there are certainly different sizes of squares.

Instead, what we usually mean when we say two things are the same shape is that you could scale one up to the size of the other and then the shapes would be identical. (The specific math word used for this is that the shapes are similar.) How can we tell if the two isosceles triangles in the Esplanade are similar?

A little geometry tells us that two isosceles triangles are similar if their vertex angles (in this case, the “pointy ends”) are equal. So if we had a giant protractor and could set it down on those two points, we could figure it out. But unfortunately, we don’t have a giant protractor, and those two points are stuck in the middle of the pool; there’s no way to get to them without taking a swim (and breaking Fair Park rules)!

To take a different approach, if those angles are equal, then the sides of the lower triangle will be parallel to the corresponding sides of the upper triangle. And in the photo above they do look parallel. So can we be sure? It looks pretty good even from another view: 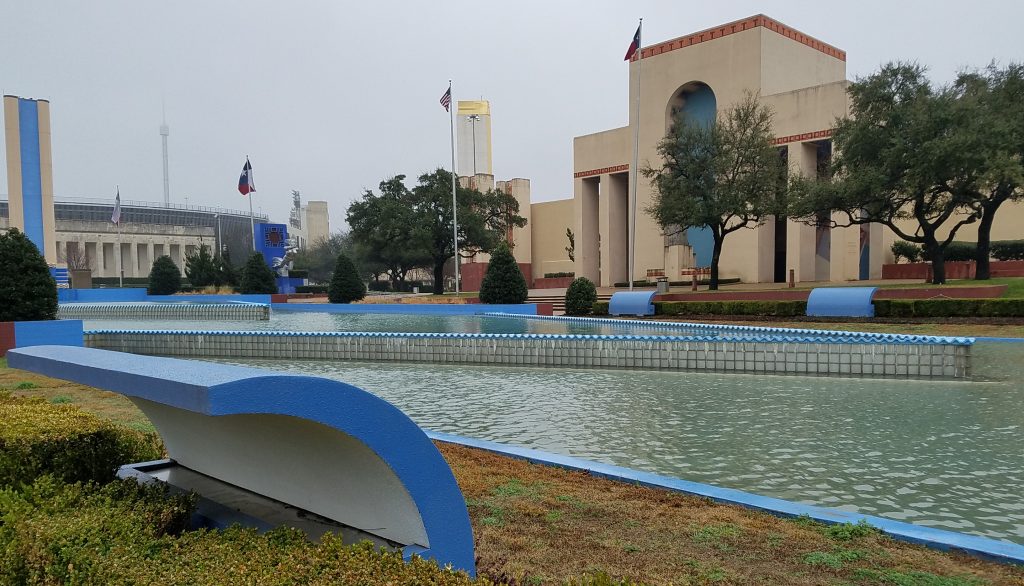 However, to be really sure, we should go back to the very definition of “similar:” every dimension of the two shapes should be in the same proportion. To check this, we should pace out the “horizontal” (along the short side of the pool) and “vertical” (along the long side of the pool) dimensions of each of the two walls. If you take equal-sized steps, you can just count your steps along the edges of the pond from when you are opposite one end of the wall until you are opposite the other. To get the short dimension, where the far, pointy end of the triangles are blocked from view by the tower on the left of the pictures, remember that those points of the triangles are lined up with the center line of the pool (and don’t forget that the farther wall extends farther to the left and right of the tower than then near wall — make sure you’re lined up correctly when you are pacing them off).

When you have the two counts for each of the walls, divide the “vertical” count by the “horizontal” and see if you get the same quotient; that’s the definitive test of similarity. Give it a try!