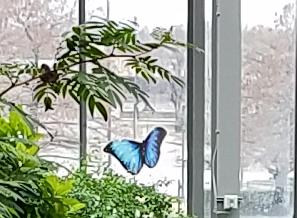 As you walk around the butterfly aviary in the Texas Discovery Gardens, you may see some bright blue butterflies like the one in this picture. If you see one land, you may see it close its wings and discover that the undersides of the wings are a dull brown-grey.

But what if I told you that the top sides of its wings are the same dull color, and only look bright blue because of the mathematics of addition and subtraction of functions? It’s true!

To see how this can be, you first need to know that rays of light act like waves. They are not waves in the air (those are sound waves), they are waves in the “electromagnetic field,” which is like an energy level that permeates everywhere in the universe. The ray of light makes that energy level fluctuate up and down (extremely rapidly!) as it travels through space. And every wave has a characteristic “wavelength,” which is just the distance from one peak of the wave to the next. A ray of light of a specific wavelength will cause us to see a specific color when it enters our eye. For example, we would see a ray of light with a wavelength of 480 nanometers (that’s just 48 millionths of a centimeter!) as blue, or a ray with a wavelength of 576 nanometers as yellowish-green. The white light from the sun is a mixture of rays with a whole lot of different wavelengths.

What does this have to do with the color of a butterfly’s wings? The scales on the top side of the wings have microscopic little structures that reflect light from different surfaces that are just tiny distances apart, distances near the minute size of the wavelength of light. Those tiny separations interact with the mathematics of the wave nature of light to ensure that only blue light gets back to our eyes, making the top surface of the wings look blue.

To see how this works, consider a simple model of what’s occurring on the surface of the butterfly’s wings. Imagine two mirrors a tiny separation apart, 720 nanometers, just one and a half times the wavelength of blue light. Let’s suppose that the top mirror is only a half-mirror: it lets half the light through and reflects half the light. Here’s a diagram that gives an idea of what happens:

This time, the waves of the two reflections are perfectly out of alignment and they quench each other, which means that no yellowish-green light gets reflected back.

This way, the butterfly’s wings ensure that lots of blue light gets reflected back to your eyes and very little of any other color of light does, making the wing appear a bright blue — even though the tiny “mirrors” on its scales are made from exactly the same dull brownish material that you see on the underside of the wing! In reality, as you can see in the microscopic picture below, the structures on the butterfly’s wings are much more complicated than just a pair of mirrors (which turns out to help the butterfly look similar colors from many different directions) but the basic principle remains the same — the butterfly is using the addition and subtraction of electromagnetic waves to control what colors of light reach your eyes. 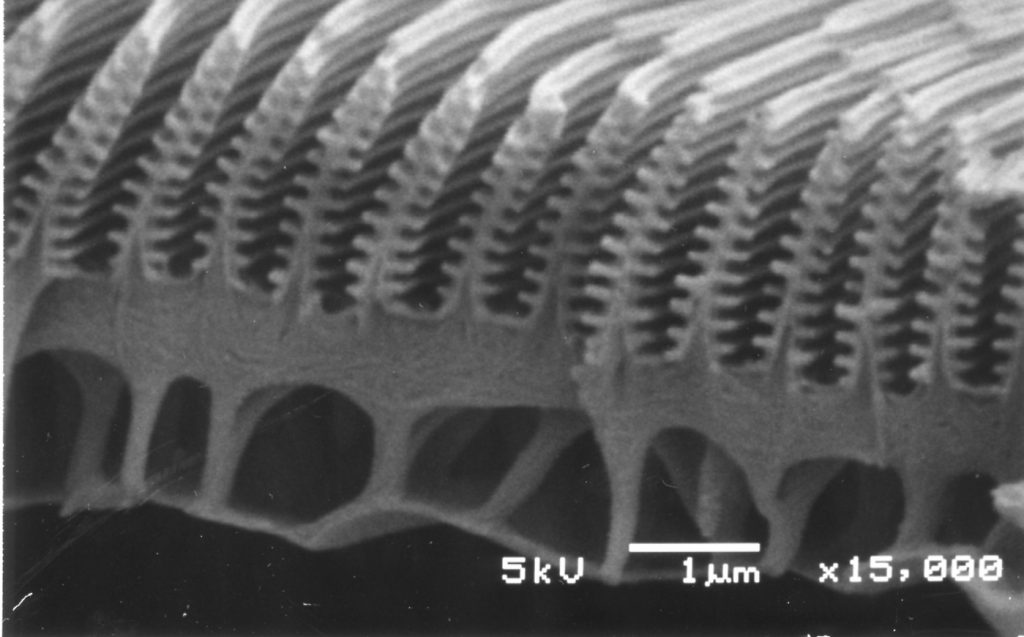