As we’ve seen in other posts, the elegant architecture of the Southern Methodist University campus is a rich source for seeing mathematical concepts in action. One technique that architects use to unify the design of a building is to have a repeated feature or shape that recurs in multiple circumstances in the building (much as the 2:1 ratio does in the Nasher Sculpture building designed by Renzo Piano). AS you come into the interior of the Blanton Student Services building, are there any such architectural motifs that catch your eye? There are lots of possibilities that you might mention, but one is the ellipse that you will see in archways, in the ceiling, and in the large cutout between the first and second floors. 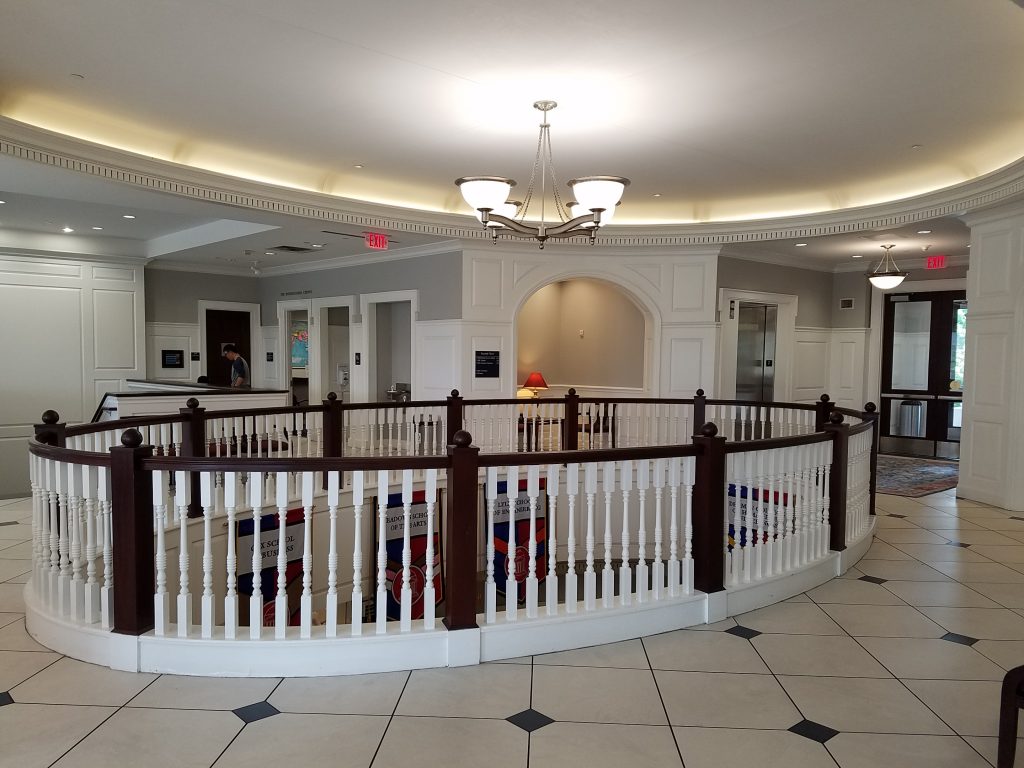 To be most effective, the architect would want all of these ellipses to be the same shape; in other words, if you enlarged the floor cutout, would it match the ceiling, or if you shrank it down, would it match the elliptical archway? All circles are the same in this way, but there are different ellipses: some are long and skinny, and others are fatter, close to being circles. In fact, an ellipse is just a circle stretched out in one dimension, and it’s that amount of stretching that determines the shape of an ellipse.

Mathematically, we can capture the amount of stretching in the ratio of the longer and shorter axes of an ellipse, or what are usually called the major and minor axes of the ellipse. 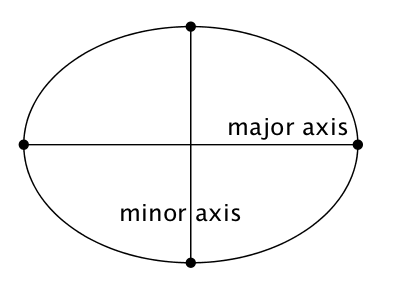 If the ratio of the minor to major axes of two ellipses are the same, then they are the same shape (or similar in mathematical terminology).

Suppose we wanted to determine if some of the ellipses in this building are similar in this mathematical sense? We would just need to calculate the ratio of the minor to major axis in each case. Finding that ratio is not difficult in case of the elliptical arch. You can use a tape measure all the way across the archway to get the major axis, and you can measure the height at the center of the archway and subtract the height along the side of the arch where it just begins to curve. That will give you half of the minor axis, because the top of the arch is half of an ellipse.

But how can we calculate the axis ratio of the the elliptical hole in the floor? We likely don’t have a measuring tape of long enough to reach across the hole, and even if we did, especially with the railing, there’s no clear way to hold the measuring tape in place.

Then just walk around the hole in the floor from tile intersection to intersection, marking on the graph paper the correspoding grid segments that you traverse. Stay as closs as possible to the hole while staying on the grid. When you have finished, you should have a diagram that looks roughly like this. 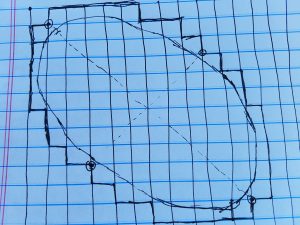 Now you can either sketchthe ellipse into the grid as I’ve done, or just use the points from the grid closest to the ends of the major and minor axes. In either case, you can just measure the two axes right from the map, and take their ratio. The axis ratio should closely match what you found for the archway, showing that indeed, the architects have used identical ellipses as a motif in this building.

If you want to connect with the symmetry theme found in several other of the SMU tour posts, you can have participants notice that the map of the grid lines around the perimeter of the ellipse is composed of four identical sections that could be superimposed on each other by rotating and/or reflecting them; this situation occurs because each of the ellipse’s axes is also a line of mirror symmetry of the ellipse. It also has a twofold point of rotational symmetry at its center.