The front of the Blanton Student Services Building poses a geometric puzzle.

Or rather, the columns do: are the sides of the columns vertically straight, or do the columns become narrower as they go up? Of course, they appear narrower toward the top, but everything looks smaller the farther away it is. So how can we tell whether it’s just appearances or the columns are actually narrowing?

(As an aside, you might wonder why columns would be built narrower toward the top? As you can read in this article, people have been building columns this way for milllennia, but it remains a bit of  a mystery as to why.)

In any case, with a bit of measuring, geometry, and careful photography, we can settle the issue for these particular columns. The first thing to notice is that the columns are centered in the large stone blocks at the top of the building, and the edges of those blocks line up with the pairs of lights in the roof over the porch, and those lights in turn line up with the center lines of the windows. So to get the separation of the columns (center to center) we can just measure the horizontal distance at the ground between the center lines of two adjacent windows.

Next, you can measure the diameter of the columns at the ground relatively easily, either by wrapping a cord around them once , measuring the cord, and dividing by pi, or by using straightedges (like yardsticks) to carry extreme points of one of the columns forward to the edges of the pedestal and measuring the distance between them. (If you do it this way, be careful to keep your straightedges parallel.)

You will discover that the diameter of the columns at the ground is a little over one-third of the separation between the columns, which is equal to the width of the large stone blocks at the top. Now, a careful blowup of a section of the above photograph (which was carefully taken from directly in front of one edge of a column) will show whether at the top of the column the column is wider than the space to  its left to the edge of the block, which it would have to be if it remains larger than one third of the width of the block. Let’s see: 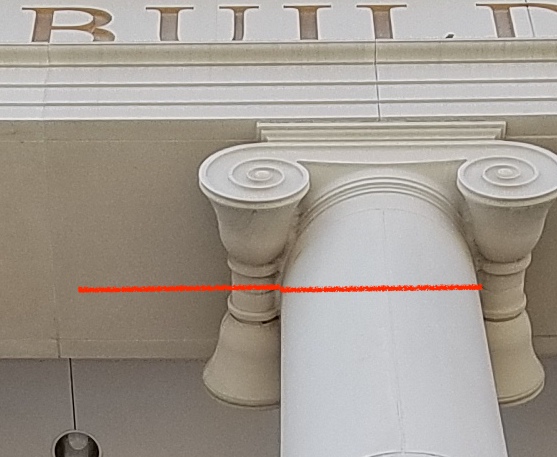 The two red strokes added to the photo are both the same length, so you can plainly see that at the top, the width of the column is less than one third of the width of the stone block. Hence, the architect of these columns decided to use the classical technique of having them become narrower toward the top, rather than giving the columns straight vertical sides. Mystery solved!

As a follow-up activity, you can have participants guess how tall the columns are, and then measure them by measuring the bottommost vertical section, and multiplying by the number of vertical sections.

You now actually have enough information to calculate the weight of each of the columns. Use the volume formula in terms of radius and height for a cylinder (even though we figured out they are not precisely cylinders, you’ll still be close; in fact, you’ll be exact if you use the average radius between the top and bottom of the columns). Then look up the density of concrete, multiply, and convert units. I ended up with each column weighing very roughly 25 tons or about the weight of a dozen cars.